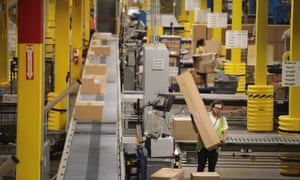 Guardian investigation reveals numerous cases of Amazon workers being treated in ways that leave them homeless, unable to work or bereft of income after workplace accidents

At this point, Amazon is no different than Walmart, except that they have a better PR campaign and you can order things without putting on pants and leaving the house.

I’ve been reading how horrific the Amazon distributions centers are for years.

Radiolab had a podcast titled Brown Box that went over the process.

The nomadic van dwellers often work there as part of Camperforce, where retirees and nomadic full timers can work through the Christmas season to make some cash. The Vandwelling community has been very clear that it’s 10-12 hour days for the duration and not much in the way of days off, and you had better be super physically fit because it will crush you otherwise.

Amazon needs to get it’s shit together and stop treating people this way.

Against a grim national backdrop in which traditional labor unions are being drained of any remaining power, the persistence of the domestic workers’ movement throughout the country is indicative of how labor organizing may continue to evolve, incorporating workers’ efforts to exert pressure directly on local policymaking bodies.

Source: Seattle Domestic Workers Win Most Comprehensive Bill of Rights in US

Usually I post about things that piss me off, but this is a good story for once. Fuck yeah!

I’m so proud of Seattle.

Seven national fast-food chains have agreed, under pressure, to eliminate a practice that limits their workers’ ability to take jobs at other restaurants in the same chain, the Washington state attorney general announced Thursday.

The move came after Bob Ferguson, the state attorney general, threatened to sue them over the practice, saying it was anti-competitive. The chains — including Arby’s, Jimmy John’s, Auntie Anne’s, Buffalo Wild Wings, Carl’s Jr. and Cinnabon — will stop enforcing or using such practices across the country. McDonald’s previously agreed to remove such restrictions.

The announcement comes on the heels of a separate probe announced by 10 other state attorneys general and the District of Columbia into the same issue. That investigation involves eight chains: Five Guys, Dunkin’ Donuts, Burger King, Arby’s, Little Caesars, Panera, Popeyes and Wendy’s.

Source: Fast-Food Chains Back Away From Limits On Whom They Hire : NPR

This is about those “no-poach” agreements. It’s not like these are multi-billion dollar CEOs, or guys working in industrial sensitive areas, this is just the worker getting you a Big Mac, or a sub sandwich.

It means that when you quite, get your hours reduced to avoid paying you enough, or whatever, that your next employer in your chosen industry won’t hire you. We are talking minimum wage workers, here, who don’t have a lot of options anyways.

I can genuinely see why a do-not-compete agreement is okay if you are working with one business on sensitive material, but for a cashier or cook? That is just a way to screw your employees. It’s unethical and untenable.

I don’t mean absolute poverty. Americans are not living on a few dollars a day, by and large, like people in, for example, Somalia or Bangladesh. America’s median income is still that of a rich country, around $50k, depending on how it’s counted. Nor do I really mean relative poverty — people living below median income. While that’s a growing problem in America, because the middle class is imploding, that is not really the true problem these numbers hint at, either.

America appears to be pioneering a new kind of poverty altogether. One for which we do not yet have a name. It is something like living at the knife’s edge, constantly being on the brink of ruin, one small step away from catastrophe and disaster, ever at the risk of falling through the cracks. It has two components — massive inflation for the basics of life, coupled with crushing, asymmetrical risk.

Source: Why America is the World’s First Poor Rich Country – Eudaimonia and Co

I’ve been watching this go down in the last decade. Take for instance the exploding number of folks that are now living in vans. Vandwelling would probably not have been so huge if it wasn’t for the economic environment that we find our selves in.

These are folks that just can’t pay rent or own a home. they can make money, but inflation has priced them out or they have experienced one bought of bad luck and lost it all.

I know and work with people that are literally one paycheck away from being screwed. I have a white collar job. A good well paying one, but just buying a car and a house pushes folks to the edge.

These are not people that are making bad choices. It’s just economic reality. Our wages, and the economic environment is what’s happening.

It was once the standard that firms that performed well would give all their employees an annual raise, in part to acknowledge workers’ contribution to the business’s fortunes, in part to ensure that wages kept pace with inflation (otherwise workers would be suffering a real-terms pay-cut every year).

American firms are more profitable than ever, and enjoying never-seen low rates of taxation, but the new profits and retained earnings are being diverted to financial engineering schemes like stock buybacks that enrich shareholders, while workers’ wages have suffered from decades of stagnation.

At a conference last week at the Dallas Fed, the corporate leaders onstage declared that the era of across-the-board raises was over, and would never return.

Boing Boing has collected a couple of articles to discuss why you aren’t getting yearly raises anymore.

This is something lower wage earners have known for a while. You don’t get a raise. They just hire new workers at a more competitive rate, and the only way to increase your situation is to quite your crappy job to trade it for a new crappy job.

Is this really surprising that people that make millions a year have decided the men and women that work at the bottom don’t get raises to keep their wages in the livable range?

In a victory for employers and the Trump administration, the Supreme Court on Monday said that employers could block employees from banding together as a class to fight legal disputes in employment arbitration agreements.Justice Neil Gorsuch delivered the opinion for the 5-4 majority, his first major opinion since joining the court last spring and a demonstration of how the Senate Republicans’ move to keep liberal nominee Merrick Garland from being confirmed in 2016 has helped cement a conservative court.

This is something we should all be upset about. It means that binding arbitration clauses in employment contracts are a go, legally speaking. This is a huge problem because bind arbitration allows the business in question to use their own arbitrator, who is usually on retainer to them, to decide if your case has merit.

The Labor Department plans to unwind decades-old youth labor protections by allowing teenagers to work longer hours under some of the nation’s most hazardous workplace conditions, sources familiar with the situation told Bloomberg Law.The DOL will propose relaxing current rules—known as Hazardous Occupations Orders (HOs)—that prohibit 16- and 17-year-old apprentices and student learners from receiving extended, supervised training in certain dangerous jobs, said the two sources. That includes roofing work, as well as operating chainsaws, and various other power-driven machines that federal law recognizes as too dangerous for youth younger than 18.

What? I mean, would they like to toss some orphans out on the street too? I just can’t get over how 2 dimensionally evil this administration is. Removing child worker protections? How in hell does anyone think that’s a good idea.

Democratic senators pushing to get information on the extent and cost of sexual harassment in offices across the country have been turned down by the US Labor Department on their request for the agency look into the issue because — the agency says — it would be too complex and costly.

Are you fucking kidding me? We have the budget. We have the money. We just decided it was too much work? Nice to know sexual harassment victims are such a low priority. 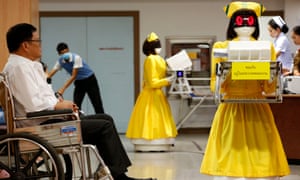 The World Bank is proposing lower minimum wages and greater hiring and firing powers for employers as part of a wide-ranging deregulation of labour markets deemed necessary to prepare countries for the changing nature of work.

I had never really thought of the World Bank as anything other than that financial stuff that banks do until I watched a documentary in college.

It was a documentary on how the World Bank fucked Jamaica. It was at that point, I started paying more attention to who and what the World Bank does.

They are just cartoon nasty two dimensional in their aims. They pretty much support corporations at the expense of workers. They screw smaller countries with predatory loaning practices.

It’s not shocking that they recommend fewer worker protection regulations.

The leaked NRA poll is the first instance of a known national poll commissioned by the industry itself that shows how widely popular raising the minimum wage is and how small the opposition is, even though other published national surveys have shown a similar level of public support.The leaked poll also sheds new light on arguments the NRA has made through its local proxies in its campaigns against raising the minimum wage.

Source: The Restaurant Industry Ran a Private Poll on the Minimum Wage. It Did Not Go Well for Them.

They used LuntzeGlobal to run the poll. That’s the go-to for the GOP for these kinds of polls.

I have been reading articles for years about restaurant wages, and how increased wages actually can help business by reducing turnover.

If you read the article, you can see how these assholes disregard their own poll, which they paid for, in favor of still attempting to keep wages depressed. Fuck them.