Sexual violence has “become an inescapable part of the collective migrant journey” for women who cross the border—and it doesn’t end once they enter the United States, as a new report from the New York Times makes painfully clear. From smugglers who exploit women making the journey north to Customs and Border Protection agents and Border Patrol officers who then use their authority to abuse women in their custody, the threat of violence can be ever present.

Source: Sexual Violence Is an ‘Inescapable Part of the Collective Migrant Journey’

This is  a risk to women, boys, queer folks, and anyone that can be victimized really.

This entire situation is constructed by our poor immigration policy.

The Trump administration is trying to convince Vietnam to repatriate some 7,000 Vietnamese immigrants with criminal convictions who have been in the United States for more than 30 years.

Source: 40 Years After The Vietnam War, Some Refugees Face Deportation Under Trump : NPR

Are you fucking kidding me?!

At least nine infants younger than a year old, including one who is just 5 months old, are being held in ICE custody at a rural Texas detention center without care that’s legally required.

That’s what three immigration advocacy groups claimed in a letter to the Department of Homeland Security’s Inspector General and Officer for Civil Rights and Civil Liberties on Thursday afternoon. The groups said there has been “an alarming increase in the number of infants” being held in ICE custody, and urged the department to “intervene immediately” at the Dilley, Texas, facility.

This is categorically evil. These are babies!

A 24-year-old woman currently being detained by Immigration and Customs Enforcement went into premature labor and delivered a stillborn baby.

Here’s another story about the sexual abuse of migrant children.

In each of the past four years, 1,000 or more immigrant children who arrived at the southern U.S. border without their parents have reported being sexually abused while in government custody, according to federal records released Tuesday.

ICE is every kind of human horror. I’m not even entirely sure if this is hyperbole. Sexually abused and murdered children, children separated from parents, pregnant women not given medical care and losing their 6 month pregnancy to still birth, beaten and murdered transgender women?

If there is a hell on earth, I’m pretty sure ICE detention centers are it.

A transgender woman who the U.S. deported back to her native El Salvador died earlier this month after she was attacked outside the country’s capital of San Salvador.

Source: Transgender woman deported from US murdered in El Salvador

This tragedy was bound to happen with our current immigration fiasco. I wish that wasn’t the case.

At the San Diego-Tijuana border, journalists covering the asylum-seekers are being pulled into questioning by customs and border agents. Lawyers and volunteers are facing the same scrutiny.

Source: Journalists And Lawyers Are Pulled Over For Questioning By Border Agents : NPR

It should be concerning that journalists and lawyers are being targeted by border agents.

Immigration and Customs Enforcement failed to hold private contractors accountable for problems at detention facilities where migrants in the country illegally are held, according to a report from the inspector general at the Department of Homeland Security.

The report detailed several of the most egregious cases, including contractors failing to notify ICE of sexual assaults and employee misconduct, using tear gas instead of approved pepper spray, and commingling detainees with serious criminal histories with those who might be at risk of sexual assault.

In all of those cases, the contractors did not face any monetary penalties.

You know what they did get fined for? Two cases where detention center workers were underpaid and had poor health care and mental health standards.

Not the brutalization of the people they are black bagging.

21 Savage’s wealth and fame did nothing to protect him from the same government agency that targets courthouses; withholds prosthetics from amputees awaiting deportation; and, this week, acknowledged losing track of thousands of children after forcibly separating them their families. 21 Savage is unique in that his name is known, unlike the roughly 42,000 people being held in ICE detention on a given day. But his celebrity did not protect him from an immigration process that denies human dignity, thrives on surveillance, racial profiling, and harassment.

That was likely ICE’s point. Contrary to speculation, there is no confirmed link between 21 Savage’s detention and his new “A Lot” verse—according to TMZ, ICE knew about his visa application since 2017 but took no action until Sunday. It’s clear 21 Savage is being used as a high-profile example, his arrest meant as a scare tactic and a tabloid-ready assertion of ICE’s authority.

Source: 21 Savage’s Detention Yet Another Injustice by ICE

Dude has been here, in Atlanta, since he was a child. He’s not fake, he didn’t make up his life for his music. It’s all paperwork, and ICE acted like they’d hunted down a dangerous criminal.

Fuck ICE. If there is a human endeavor that I would characterize as evil, it’s ICE. 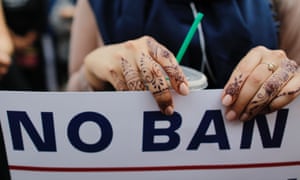 A 16-year-old Syrian refugee who was disfigured in a bomb attack on her home has been refused a visa to get medical treatment in the US because ofDonald Trump’s travel ban, the Guardian can reveal.

Marwa resettled with her family in Germany, but doctors there encouraged her to seek more sophisticated medical treatment in America following 13 operations to repair trauma from third-degree burns to her face, arms and chest.

Shriners Hospitals for Children in Boston scheduled an appointment to treat Marwa in November 2018 and a volunteer agency in Massachusetts offered to provide temporary housing for her and her father. But the US government denied her visa on 20 December, claiming there was not enough evidence to prove she would return to Germany.

This has stunned Marwa’s supporters, who emphasized that all six of her siblings, including a twin sister and her parents, grandparents and uncles have resettled in Germany and were integrated into their new home near Nuremberg.

We are denying medical care to a 16 year old bomb victim because we think what? She’s going to run away from her entire extended family in Germany on her own in the US? What the actual fuck.

We knew that the Trump administration’s policy of separating migrant children from their parents as a deterrent to others who might seek asylum in the United States was inhumane, poorly planned and disastrously executed. Now a new government report reveals that the pubic didn’t know the half of it.

The incompetence is astounding.

This policy is so 2 dimensionally evil. It’s not helpful. It doesn’t solve anything. It’s horrific.