Police have arrested the son of a Louisiana sheriff’s deputy as a suspect in connection with three historically black churches that were torched in recent days.

Officials identified the suspect as Holden Matthews, a 21-year-old white male from St. Landry Parish, a small community about an hour west of Baton Rouge.

“I don’t know what this young man’s motive was. I don’t know what was in his heart,” Louisiana Gov. John Bel Edwards said at a news conference Thursday morning. “But I can say it cannot be justified or rationalized. These were evil acts.”

Matthews was charged with state crimes on three counts of simple arson of a religious building, said Louisiana State Fire Marshal H. “Butch” Browning. Each charge has a maximum penalty of 15 years in prison.

This is a racist hate crime. The end. Period. I notice that is not among the charges.

A civil rights institution in Tennessee was burned down and a white supremacist symbol was found near the building.

The Highlander Research and Education Center is an iconic social justice leadership training school that was founded in 1932 and provided training for many leaders in the Civil Rights Movement, including Rosa Parks and John Lewis.

It moved to its current location east of Knoxville in 1972 and works to help grassroots organizing to this day.

The fire, which started last Friday morning, destroyed the Highlander Center’s main building, along with decades worth of historical documents and artifacts.

They found a symbol at the fire that relates to the white supremacy movements.

Today, the United States House Committee on the Judiciary held a hearing on hate crimes and the rise of white nationalism, and it was even more of a mess than you might have guessed just based on the subject matter—or not, if you’re all caught up on how this conversation has been going outside of Congress lately.

This was yesterday. It’s important we had this hearing.

The Property of the People transparency group (previously) has published another damning US intelligence file, this one a report circulated by the Regional Organized Crime Information Center (RICOC, a joint state/federal intelligence body), revealing how the US intelligence bodies advised local law enforcement after the Charlottesville white supremacist march.

RICOC appears to have taken Trump’s “very good people on both sides” doctrine to heart, from the report’s title (“Antifa/Anti-antifa: Violence in the Streets”) and through its conclusions, which claims that white supremacists are animated by an opposition to antifa, ignoring the movement’s actual genocidal ambition to use ethnic cleansing to establish a “white homeland

I’ve seen this “both sides” rhetoric online and in the media. It’s a false rhetoric because anti fascists organize around stopping nazi’s, the alt-right, and race supremacy organizations. They are a direct response, and a lot of the anti facists groups will bodily put themselves between peaceful protestors and armed alt-right goons.

A lot of these are framing white supremacists as the upstanding citizens, and anti fascists as the terrorists. People protecting others and opposing the modern incarnation of literal nazism are not the terrorists here.

But then again, I have heard drifting reports for the last two years of cops just letting armed white supremacists violently attack folks, and not step in. I guess we know why, now.

Basically Mojang scrubbed any mention of Notch, aka Markus Persson, off the game except for the end credits. There used to be references to him in splash screens etc. While he started Minecraft, I think it’s safe to say the game has taken on a life after him, and the hardworking folks at Mojang don’t deserve to live under his shadow.

He’s a anti-transgender shitbag. He’s said all sorts so shitty things in the past, this is just the latest salvo. He sold Mojang to Microsoft, dumped everyone at Mojang, and bailed, and has been a shitty person to them ever since.

Fuck Notch and his transphobic shit.

The Anti-Defamation League says white supremacist propaganda has increased by more than 180 percent in the past year, as the groups seek to recruit disaffected white kids looking for community.

In the 1980s, the racists in Idaho used to come to my town and do recruitment drives. They would pay for the angry white boys to go to Idaho and spend two weeks in an all expenses paid white supremacist camp. We had racist skinheads back then, but they took anyone that they could get. This isn’t eat first time these groups have risen up.

This cannot be ignored. This has to be combated. We cannot allow these people to go unchallenged. Racism, sexism, and anti-LGBTQ sentiments all run in the same path. We have to stand against it.

This is an article that discusses the current “trolling” that the alt-right, white supremacists, and other hate groups engage in. The basic idea is they take something innocuous, and use it as a rallying point. Then they deny that it is what it is, laugh, and move to a different innocuous symbol. It’s for the lulz, and a rallying point all in one. 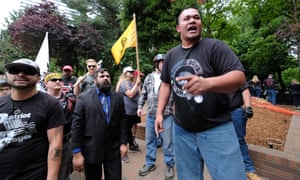 They are being very careful with the “he saids” but there were witnesses, and it was corroborated.

This is another Proud Boy bit of bullshit. These guys are all over the Pacific Northwest right now. “Tiny” Toese is also a member of Patriot Prayer in Vancouver, WA.

These are hate groups, pure and simple.

Markus Alexej Persson, who goes by Notch, created Minecraft. The game, released in 2011, is the second-best selling video game of all time. It was acquired by Microsoft in 2014 for $2.5 billion.

Source: The Minecraft creator went on a transphobic rant & Twitter wasn’t having it / LGBTQ Nation

I have to note my biases as I write this. I am a long time Minecraft fan. Markus Persson has been a complete jackass for a long time. The fact that his a transphobic jackass is not shocking because his uneducated bullshit views have always been an issue. So fuck Notch.

White supremacists exploit the weaknesses in the social-media ecosystem as Facebook and Google struggle to keep up.

Source: Extremists Understand What Tech Platforms Have Built – The Atlantic

This article discusses why phrases like “Subscribe to PewDiePie” is a trolling racist dog whistle. How covering white supremacist movements requires a different kind of coverage these days from journalists because the tactics have changed.

I agree wholeheartedly that these racist people are now using innocent phrases to signal to others of their ilk. We can either ignore their smug in jokes, or call it out for what it is.